How About Iceland for an Ultra Marathon?

Laugavegur Ultra Marathon is a 55 km mountain race that in one word is epic! So, seeing that we were going to Iceland to hangout with Eliot's college buddy Compton and scamper around the country for 10 days, I did some Googling to find out what the wee island of Iceland had in the way of running races. I sent Eliot the race link one day at work, and he emailed me back with "great find, I've signed the two of us up!"

I learned 2 things right at that moment. 1. Iceland is not a wee island and 2. Give Eliot an idea and you've more or less committed to that idea. His services are free, so just hit him up with any ideas and provide your credit card.

Iceland has been on my 'I would like to go there' list since I lived in Ireland. I could never get anyone to come with me as it was not a sun holiday destination. Sun holidays are overrated: too much sun gives you wrinkles and Irish skin is not designed for vast amounts of sun in one sitting.

My race research is not as in depth as Eliot's, I never want to scare myself too much, as then I over think the whole event. I took a look at a few of the website's photos, elevation map and route map and it all looked warm and fuzzy to me!

The Laugavegur (say that fast, 3 times) marathon is an extremely well organized race. The website has a bountiful amount of information to set your mind at ease. There is a fair bit of logistics getting to the race start and getting home after. The route is a popular point to point hiking trail, normally done in 4 days. For 18 years the race has taken place for people who are not shy of the elements. Iceland in the summer months can be like a rodeo rider...tough! One has to be prepared for anything, wind, rain, hail, snow and or sunshine. The race organizers were super informative in the weeks and days leading up to the race day, July 12th.  The weather report for race day per the website : "Fresh winds from east and later northeast and relatively humid air. Wind speed as large as 10-13 m/s at Hraftinnusker. Some rain and even fog at higher bases. Becoming gradually lighter and more headwind at lower altitudes. Also fewer rain showers there, and likely totally dry in the end near Þórsmörk". So, temps ranging from 6-8°C/ 45-47°F...perfect for me and not a sweltering Reno desert heat of 'hotballz'.

Eliot and I arrived in Iceland on a Thursday morning, rallied to stay away awake for all of Thursday, hug out with Joe (Compton) and got a general feel for Iceland or at least Reykjavik. Joe kindly gave us a place to crash at his awesome pad right on the main street in the capital city of Reykjavik. The city and surrounding region has about 200,000 inhabits of the country's total count of 325,671. It's a total trip. It's such a treat to come to a country and a city that has a stress free feel and not the inundated vibe of many cities in the U.S.

With a whopping 12hrs of sleep that night (it was day light throughout, remember it's summer in the northern hemisphere), we were ready to rally on Friday and get our bits and bobs sorted for the race on Saturday. We got up at 3am on Saturday morning, this was easier than usual as it was dusky out and then we made our way to the local sports center. Here we shuffled onto buses along with other runners and embarked on a 3hr ride to the race start...yes, 3hrs! We had a 30 min stop along the way, here we chowed some breakfast and chatted to some of the other runners. We ended up sitting at the same table as two other Irish guys who were doing the race for the first time too. Being Irish, you are guaranteed to bump into other Irish folk no matter where you go in the world, then the chat flows! By now I was getting excited, no going back at this stage. I also brought a gopro to document the whole event!

By the time we got to the race start, the wind and rain were coming down hard. People waited in line to sign in, while trying to stay warm at the same time. 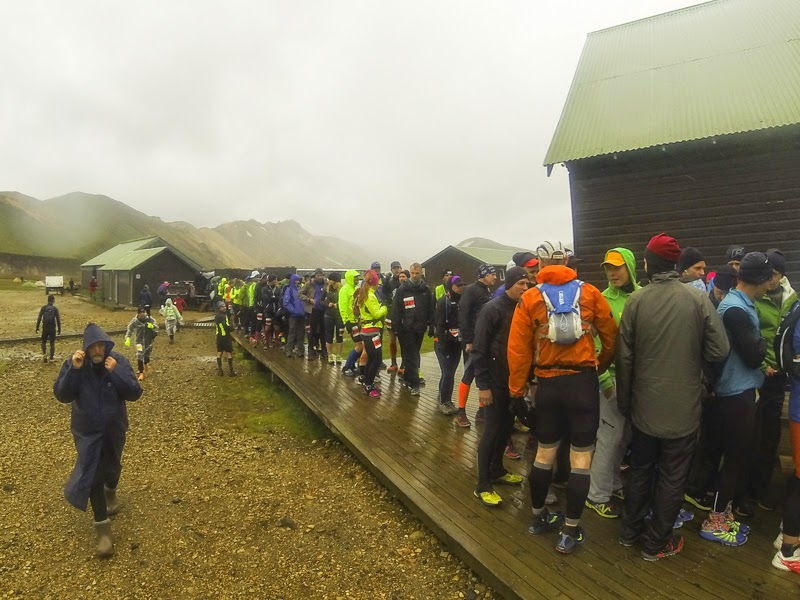 It's a tad bit chilly.

ethelm
Irish born and raised. Left the mother land in 2004 to gallivant and haven't stopped since.